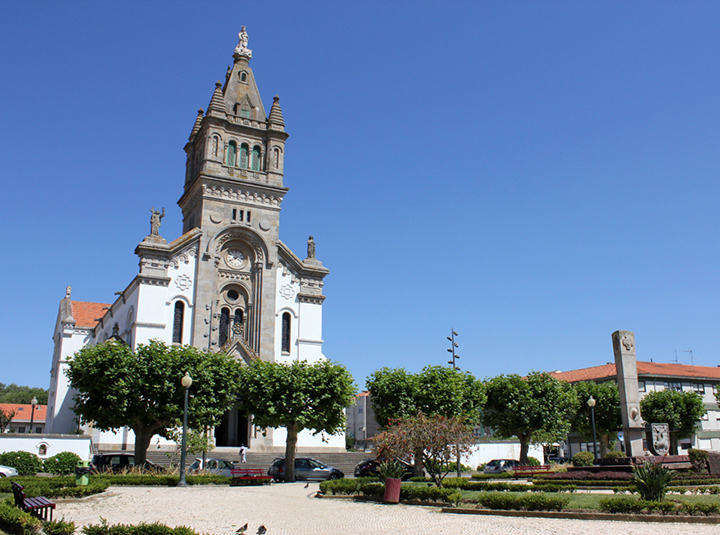 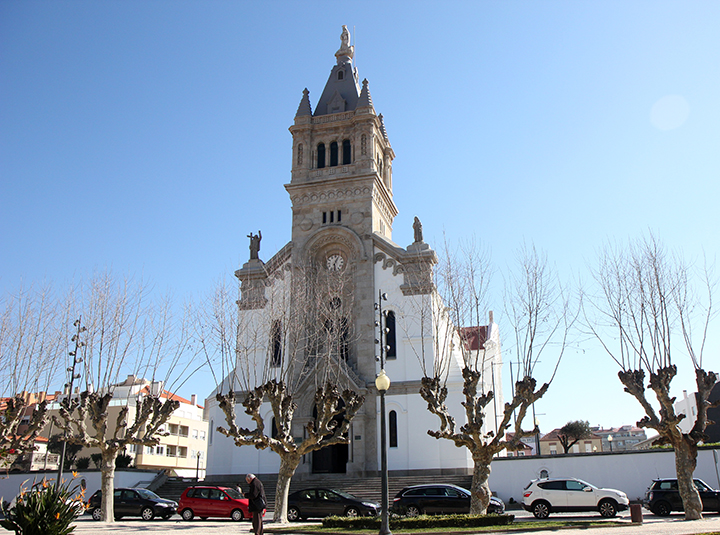 In honour of Nossa Senhora da Ajuda, the project is due to the architect Adães Bermudes, who designed it in the last years of the 20th century. It follows the neo-Romanesque type of the second half of the eight hundreds, which in Portugal widely extended. It is a large temple, with great unity of style.
In the exterior, it stands out among the neo-Romanesque elements a large and decorative tower, which gives the building some stature. The interior is arranged in a single nave, preceded by an atrium. The presbytery, rectangular in shape, is surrounded by sacristies.
It stands out for its artistic value the polychrome wood of Christ Crucified, notable work of the sculptor António Teixeira Lopes. A painting signed by Joaquim Lopes is the perfect background to represent the souls of purgatory.
The exterior images are made of granite and were sculpted by António Cardoso.
The images of the front top represent Faith on the left and Hope on the right.
The Main Church has two images of Nossa Senhora da Ajuda, Santa Padroeira; the largest is in the third altarpiece next to the Gospel and is flanked by the baby Jesus on the left and Nossa Senhora do Perpétuo Socorro on the right. In the chapel there is also a small image of Santa Padroeira on the Eucharistic throne.
Iconographically, the saint is represented by a woman with long brown hair, with a transparent white veil and a crown on her head; she wears a pink robe and a blue cape over his left shoulder. Their feet are dressed in sandals and rest on a white cloud that is in a sinking boat. In his left hand she holds Baby Jesus, and in his right hand, the end of a rope that is throwing into the boat.
Nossa Senhora da Ajuda is one of the many titles attributed to the Virgin Mary. His legend was born when two Galicians were shipwrecked and, after being safe, decided to build a chapel in her honour.
The cult appeared along with the city of Espinho and the current chapel dates from years after the one built by the Galicians, which was destroyed by the sea. Santa Padroeira image has been moved and is currently in the chapel of Santa Maria Maior (Capela de Nossa Senhora da Ajuda). The pilgrimage takes place annually on the third Sunday of September.